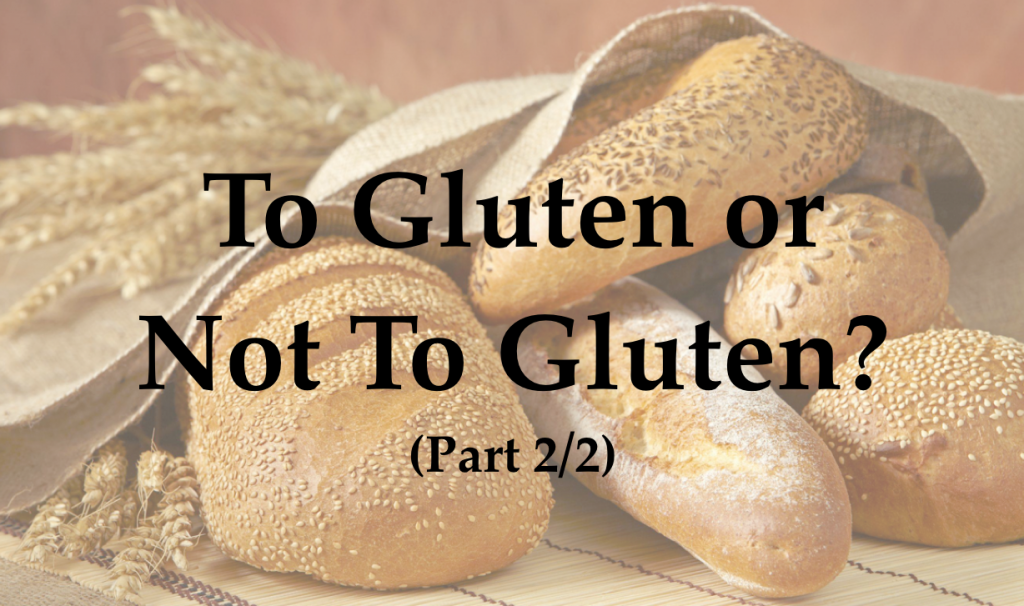 If you missed part 1, go here.

The good news with all of this gluten business is, if you eliminate it from your diet and you’re sensitive, symptoms will get better. I have seen this many times clinically, spoken to many people who have experienced this, and the research corroborates these findings.

In a recent study published in the American Journal of Gastroenterology, subjects experienced multiple symptom relief from a gluten-free diet (see below). 1 A 61 year-old female came to see me about chronic irritable bowel syndrome (IBS) presenting as painful gas, diarrhea, and multiple food sensitivities. Her symptoms began at the age of 25 after a trip to Guatemala where she was exposed to giardia and treated with Flagyl.  A recent trip to Peru exacerbated the symptoms, and it was noted that every time she travelled symptoms seemed to get worse. Emotional stress 2 (from travel) and exposure to foreign microorganisms 3 can both increase IBS symptoms.

We began with eliminating dairy (she mentioned a sensitivity, but was still consuming cheese), improving sleep, and introducing supportive supplementation including a probiotic.

The elimination of dairy seemed to make a difference but symptoms were still present. She tested dairy once during the first phase and had an adverse reaction.

In the second phase, a gluten-free diet was recommended due to the possibility of gluten triggering IBS symptoms. 4 5 This was a recommendation my client had never consistently followed before.

At the next follow-up, digestive symptoms had almost completely resolved. A positive side effect was that she reported not feeling “constantly hungry all of the time;” a phenomenon (of never feeling full) that is well-described in Dr. William Davis’s book Wheat Belly.

Here’s what she had to say:

“I have to admit that being gluten-free has so many benefits that it far outweighs the delight of eating breads and pastries. And as someone with an Austrian pastry chef as a grandfather and lots of training in pastry making myself, I never thought I could give pastries and breads up.”

After three bowel resection surgeries to treat inflammatory bowel disease (IBD), a 60 year-old woman decided perhaps that surgery was not “curing her.” After the third resection, the surgeon told her that she was completely cured of  her Crohn’s disease and that she could now eat whatever she wanted.

At first she felt great and was happy to be able to eat foods which she previously could not  tolerate. But after two weeks the familiar digestive symptoms returned.

We began her treatment by eliminating pro-inflammatory foods such as pork, potato chips, and corn oil, restoring her nutritional deficiencies, and replacing certain digestive factors (such as bile, due to gallbladder removal at the age of 44).

Her complaint prior to any intervention had been gas, bloating, and diarrhea (5-6 times per day). With the addition of a gluten-free diet, the client noted in an email:

“I have noticed a change for the better by avoiding gluten…fewer bowel movements and little or no gas.”

She also wrote in a letter:

“After so many years of struggling with my health I can truly say this new path toward healing is very encouraging!”

It is unfortunate that over the many years this individual suffered with serious intestinal issues, no practitioner ever mentioned the connection to diet. It was her search that lead her to new information subsequently putting her on the path to healing. This is why I always suggest having a competent team as part of your health care strategy.

There’s a saying…”one man’s food is another man’s poison.” This is particularly evident here in our study on gluten. A person can be sensitive or allergic to any food, but gluten is proving to be one of the top runners for causing people all sorts of issues.

Our constant desire to try and improve upon nature is backfiring and causing consequences that are challenging to recover from.