The Science Behind The Mind-Body Connection

Is Becel Really Saving Your Heart? 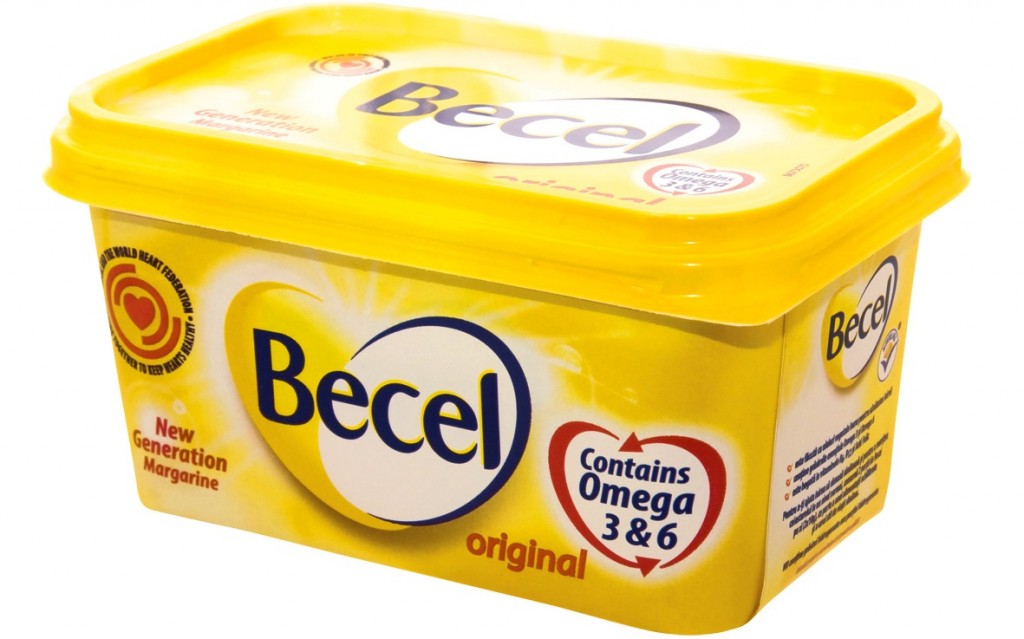 The history of margarine begins in the 1800’s when Napolean III was looking for a source of fat that was cheaper than butter for the poorer people in the country. The result was a concoction that consisted of beef fat (suet) and skim milk which tasted awful.

Since then, the story of margarine has been two-fold: experiments in order to create a much better-tasting margarine; and an effort to shift margarine’s image of being the “poor-man’s butter” to margarine as a heart-healthy food choice. 1

“Big Food” succeeded on both fronts.

In comes Becel, the #1 margarine brand in Canada. A company which claims its product is good for your heart. (Remember what I said about health claims in this post?)

And to further their campaign against heart disease, Becel (Unilever) sponsors the Heart and Stroke Foundation. In my opinion, their merger is based purely on financial goals, and not on the health of the public.

The question is then: is Becel good for your heart?

Let’s look at the ingredients:

Canola oil: It was discovered in the mid-1900s that rape seeds contain high amounts of a fat called erucic acid, which causes fatty degeneration of the heart, kidneys, adrenals, and thyroid in rats. Geneticist therefore bred a new seed that only contained 5% erucic acid, and renamed it Canola (derived from the name “Canadian Oil”).

Modified palm and palm kernel: These oils have had some of their saturated fat removed to make them smoother with a better texture. The rest of the ingredients are added for flavour, texture, colour, as  preservatives, and for added nutrition (which butter would have anyway).

Whey protein concentrate: Whey is one of the proteins in dairy. It has actually been shown to benefit the human body by increasing glutathione levels. If I were to recommend whey protein as a supplement it would be from a clean source (grass-fed cows) and in the more concentrated form isolate (not concentrate). One of the issues here is that many people are sensitive to whey, which can actually increase inflammation and thus promote heart disease.

Soy lecithin: Soy lecithin is used in Becel as an emulsifier to blend all of the ingredients. One of the issues with non-organic soy products is that the soy is genetically modified and often sprayed with many chemicals. This can wreak havoc on people’s immune systems.

Vegetable monoglycerides: Act as an emulsifier to blend ingredients that wouldn’t normally mix (like oil and water).

Vegetable colour: Used to make the product more visually appealing for the consumer.

Artificial flavour: This can be any number of ingredients, all used to mask the terrible flavour that margarine would otherwise have.

Vitamin A palmitate, vitamin D3, vitamin E: Margarine is meant to replace butter and butter is a great source of the fat-soluble vitamins A, D, E, and K. Thus, to “mimic” the natural nutrients found in butter, manufacturers add poor quality versions of these nutrients. My recommendation would be to just eat the butter (or ghee).

Cardiovascular disease is the #1 killer in North America. (More on Cardiovascular Disease prevention here). It is a complex disease process that involves many factors. The fats we choose to eat can either promote or prevent heart disease. The high omega-6 content of Becel is a precursor to pro-inflammatory compounds that promote inflammation and thus heart disease. Most people need more omega-3 fats which are converted into anti-inflammatory compounds.

Organic butter or ghee! It has been used for thousands of years. Didn’t great-grandma eat butter? …. And every generation before that? If that’s not enough, a Medical Research Council survey showed that men eating butter ran half the risk of developing heart disease as those eating margarine. 2

Furthermore, the American Journal of Clinical Nutrition released a meta-analysis in 2010 that examined studies on the link between dietary saturated fat intake and the risk of heart disease and stroke. 3 Their conclusion? The authors found no effect of dietary saturated fat intake on the risk of heart disease, stroke and CVD, and their analysis included 347,747 subjects!

Your Guide to Caffeine and Coffee…